A Journalism Fellow’s Take-Aways from FASPE
by Talia Bloch 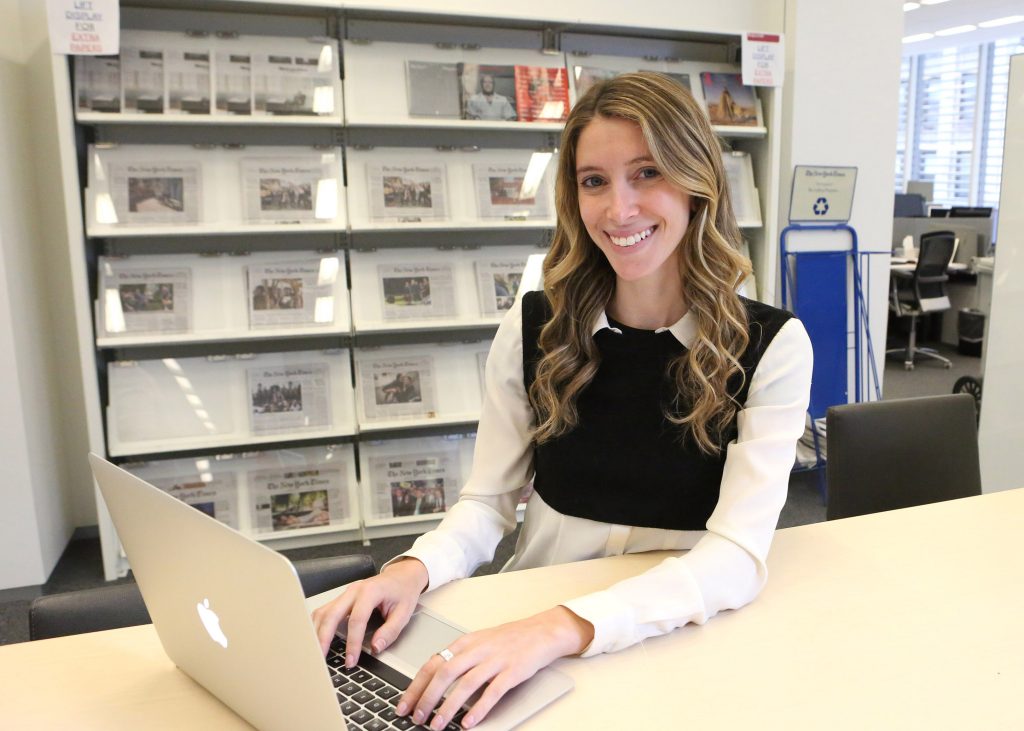 Shortly after returning from FASPE, Alexandra Levine, a 2015 Journalism Fellow, was assigned to one of the most difficult reporting experiences she said she has ever had. At the time she was working at the Forward, an American newspaper aimed at a Jewish-American audience, and a young, formerly Hasidic woman had jumped to her death from the roof of a Manhattan nightclub. Levine was told that she had 24 hours to cover the story.

“This is not the kind of thing anyone would want to feel rushed on,” recalled Levine recently, explaining that given the complexities of the story and the sensitivities of the people involved reporting it well would normally require time. Levine “pushed back against the deadline,” but she had little choice. The paper was going to print the next day. “Ultimately I made the deadline work,” she said, “I spent essentially the entire 24 hours on the story, and when there were gaps in my reporting I addressed them. I didn’t just leave them out and bury them. I called them out in the published piece.”

Although, looking back, Levine still sees ways in which she could have improved the story, she believes that she made the best of a difficult reporting situation. And she credits FASPE with helping prepare her for the ethical dilemma—as well as the sensitive reporting situation—she faced and for giving her the tools to navigate it.

Today, Levine works at The New York Times as one of two reporters for “New York Today,” a daily online column appearing weekdays that summarizes local news and events. Lessons on key ethical issues she learned while at FASPE have stayed with her.

“I write a daily column, and I need to be finished at the same time every day five days a week. It’s very challenging,” said Levine, “The tension between being in a deadline environment versus the integrity of my work—its factual accuracy and the sensitivity with which I conduct it—is an ethical dilemma related to FASPE that I think about daily.”

A second and related issue for which Levine draws on her FASPE experience is around the quandaries journalists face trying to gain access to important sources and key information, especially in an age when it is being increasingly restricted.

“Access is a big hurdle, especially in the era we are living in,” said Levine, “I feel that access is now more censored and harder to get than ever before. It really takes understanding what your own rules are, rather than reading a handbook at the beginning of a job.

“Just a couple of weeks ago,” recalled Levine, “I was writing a story about the fountain in Washington Square Park.” As part of her reporting, she interviewed a man standing near the fountain who was giving out free hugs. After the interview was over the man asked Levine for money. When Levine explained why, as a journalist, she couldn’t pay him for an interview, the man grew irate. Although the stakes were not particularly high for this story, Levine felt that her choices still mattered. “Even if it had been 25 cents I would not have felt comfortable giving him money and then using the quote,” said Levine, “I felt compelled to stand my ground, because that was what I knew was right as a journalist. I felt bad, but if you compromise on the little things it is much easier to compromise on the big things.”

Levine first learned about FASPE in the fall of 2014 while attending the yearlong master’s degree program at Columbia Journalism School. At the time, she had had almost no reporting experience outside of school. “We of course talk about journalistic ethics in journalism schools, but everything is in hypotheticals and in the protected environment of school,” said Levine, “And I thought to myself: ‘what are these ethical dilemmas and how am I supposed to know how to approach them if I’ve never had real working experience before?’”

FASPE’s immersive approach appealed to her. Because the program took her to the sites of actual atrocities and examined how journalists responded at the time, she found the program clarified how ethical considerations would apply to her life as a working journalist in a way that classroom instruction alone could not. Moreover, Levine found engaging across disciplines with those in the Business and Law programs invaluable, underscoring the larger context within which journalists have an impact on society.

And Levine’s take-aways from FASPE were also not restricted to ethics.

FASPE illustrated for Levine the importance of examining not just the victim, but the perpetrator, as well. Prior to participating in FASPE, she was working on a story for the Village Voice about a gay conversion therapy clinic based out of Jersey City, NJ. Much of her reporting had focused on the young men who had gone through the program and been harmed by it. But when she returned from FASPE, Levine said, “I realized that there was this entire other half of the story about the guy who created this clinic, and why he was doing it, and what exactly he was doing. And of course I am not equating him with a Nazi perpetrator, but FASPE made me think about the value of exploring the other side of the story.”

As a result, Levine set about delving deeper into reporting on the clinic’s director. Although the man refused her repeated requests to be interviewed, she managed to speak with people who knew him and who had worked with him in the past, and the resulting story, she said, was much more well-rounded.

'I feel that it’s a privilege to tell other peoples’ stories and have a very intimate look
into their views and lives.'

A graduate of the University of Pennsylvania with a bachelor’s degree in English, Levine always knew she wanted to become a writer, but she wasn’t sure what medium she should choose. During and following college, she experimented a great deal with comedy writing. “It was a huge passion of mine and still is,” she said. But after two years of working in the financial sector and pursuing comedy during off hours, Levine decided to apply to journalism school.

Levine sees a lot of overlap between comedy and journalism, including the fact that many comedy shows today include serious news coverage. “The reason that I ended up choosing journalism over comedy,” she said, “is that there is more social impact involved in journalism.”

Levine hasn’t given her comedic voice a complete rest, however. “New York Today” is the type of column that allows her to experiment in tone and style, including inserting a joke when the content calls for it. And lately, she has been pursuing a hobby ghost-writing speeches for special occasions—graduations, birthdays, weddings, etc.—as “The Toastess.”

In the future, Levine would like to continue reporting on local news, but turn her attention more to health, medicine and science, an area that has always intrigued her. Both of Levine’s parents are physicians, working in northern New Jersey, where Levine grew up. And she and her mother, a gynecologist, are planning to co-write their first book together, loosely based on her mother’s practice.

“I feel that it’s a privilege to tell other peoples’ stories and have a very intimate look into their views and lives,” said Levine. The biggest ethical dilemma she currently experiences as a journalist, she said, is the tension between being a professional and being a citizen.

As a matter of professional ethics, journalists are expected to keep their personal opinions out of the public eye—and the question of whether a journalist may ever openly support or protest a cause is one that is intensely discussed on the FASPE Journalism program. As Levine put it, “unless you are covering the women’s march, you are not supposed to participate in the women’s march, or unless you are covering a gun violence protest you are not supposed to participate in a gun violence protest. In all of these things if I were not a journalist, I would want to participate and I would, in fact, feel irresponsible as a citizen if I weren’t participating.”

But over the years Levine has found that she would rather explore and give voice to the opinions of others than her own. “Being able to do that and do it responsibly is as powerful if not more powerful than exercising my own voice,” she said.

The tension between acting as a citizen and as a journalist is something that has only grown for journalists such as Levine in recent years. When Levine was a FASPE Fellow in 2015 times were different. The 2016 election had not yet taken place, Donald Trump was not yet in the White House, and concepts such as “fake news” were not yet common. The most pressing conversations on the Journalism program when Levine participated were centered on the discredited article of a campus rape published in Rolling Stone magazine in 2014 and on how to properly interview and fact-check a trauma survivor.

“Everything that we are living through today,” said Levine, “there was no way we could have anticipated that happening. It wasn’t something we explored at FASPE, but I feel that with everything that has happened in the last three years—the news media cast as the enemy of the people, the #MeToo movement, alternative facts and fake news being household terms that you can talk about over breakfast with your kids—I think it’s a completely different landscape for any professional and a lot of the lessons we spoke about in hypotheticals or theoreticals on FASPE are much, much more urgent today.”