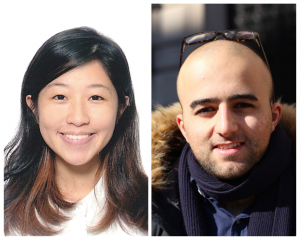 Jonathan Harounoff ('19 M.S.) and Theodora Yu ('19 M.S. Stabile) are two of 14 journalism students and early-career journalists chosen for the 2019 Journalism Program of the Fellowships at Auschwitz for the Study of Professional Ethics (FASPE) to participate in a two-week program in Germany and Poland this summer, which uses the conduct of reporters and other media professionals in Nazi-occupied Europe as a way to reflect on contemporary journalism ethics.

Now in its tenth year of operation, FASPE provides a unique historical lens to engage graduate students in professional schools as well as early-stage practitioners in five fields (business, journalism, law, medicine and seminary) in an intensive course of study focused on contemporary ethical issues in their professions.

The FASPE Journalism program examines the role played by German and foreign journalists from 1933 to 1945, underscoring the reality that moral codes governing journalists can break down or be distorted with devastating consequences. Daily seminars are led by specialized faculty who engage fellows in discussions and critical thinking about both the historical and the contemporary. The Journalism program is strengthened by the diverse perspectives of its participants and the power of place and context.

“By educating students about the causes of the Holocaust and the power of their chosen professions, FASPE seeks to instill a sense of professional responsibility for the ethical and moral choices that the Fellows will make in their careers and in their professional relationships,” said David Goldman, FASPE’s founder and chairman.

FASPE studies the perpetrators to emphasize the essential role of professionals and to ask how and why professionals abandon their ethical guideposts. Having demonstrated the power held by journalists in a modern society, FASPE addresses ethical issues now facing individual journalists and media institutions at large. With the historical background in mind, FASPE Journalism Fellows are more committed and better positioned to confront contemporary ethical issues.

A budding journalist hoping to report on, and from within the Middle East, Jonathan is excited to delve deeper into the crucially-important ethical dimension of his future profession as a FASPE Journalism Fellow. In his words, he is, “honored to be taking part in FASPE’s Journalism Fellowship at a time when our industry, and its practitioners, are under attack worldwide. The Fellowship will help build on the training I have already received at Columbia and Harvard to not just identify possible ethical issues, but also to act on them in the most moral and effective way possible."

“I think it is vital for journalists to learn from history so that we could better ourselves in upholding ethical standards while covering controversial stories. Being a FAPSE journalism fellow would be a valuable opportunity for me to learn to be conscious in our responsibilities as journalists”, said Yu, who upon graduation from university in 2016, worked as a reporter at FactWire News Agency, Hong Kong's first independent investigative news agency.

Harounoff and Yu join a diverse group of 70 FASPE fellows across all five programs who were chosen through a competitive process that drew applicants from across the U.S. and the world. FASPE covers all program costs, including travel, food and lodging.

The experience of the Journalism fellows is enhanced by traveling alongside Business and Law fellows, who together—in formal and informal settings—consider how ethical constructs and norms in their respective professions align and differ. In 2019, the three groups will travel from May 25 through June 7, beginning their trip in Berlin and then traveling on to Krakow and Oświęcim (the town in which Auschwitz is located), Poland. In Berlin, the program includes museum visits, meeting with a Holocaust survivor and educational workshops at the House of the Wannsee Conference, the site where state and Nazi Party agencies convened in 1942 to coordinate plans for the Nazis’ “Final Solution.” In Krakow, fellows will continue their seminars at Jagiellonian University, one of Europe’s oldest and most prestigious universities, and at Auschwitz, they will be guided by the distinguished educational staff of the Auschwitz-Birkenau State Museum.

After the program, each fellow will submit an essay focused on a contemporary ethical issue of his or her choice. Select essays are published in the annual FASPE Journal, which showcases work in all five disciplines.

FASPE maintains long-term relationships with its fellows in order to sustain commitment to ethical behavior and to provide a forum for continued dialogue. To date, FASPE has over 500 alumni across its five programs.

This article originally appeared on the Columbia Journalism School's website.